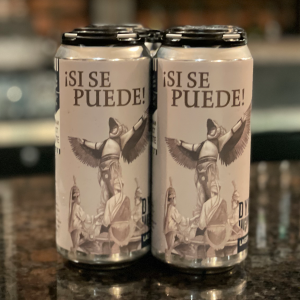 Description
A crisp, clean lager, Si Se Puede is mashed with flaked maize for a light lager with a hint of sweetness and finished with German Spelt hops for a supremely balanced beer.

Si Se Puede Lager is available year-round in retail cans and on tap.

Buy a Four-Pack
Buy a Multi-Pack

Immigration Reform
For generations, people have moved to the United States for the same reasons: to join their families, to work, and to seek safety and refuge from war, violence, and natural disasters. According to the Census, the US was home to 45 million immigrants in 2017, or about 14 percent of our population. In 2018, nearly 90 million people (28 percent of population) were immigrants or their American-born children. Two-thirds of undocumented immigrants have lived in the US for over ten years, and many live with children who are American citizens.

Americans are better off when everyone is given the opportunity to succeed and allowed to contribute to society. Yet our broken immigration system prevents millions of people from realizing their full potential. We need a system that upholds our country’s best values and actually works.

This CANpaign supports a fair, clear, and modern immigration system that unlocks opportunity for all Americans. That means protecting and improving existing legal immigration avenues and providing an earned pathway to citizenship for the 11 million undocumented people living in the United States.

Supported Organization
Profits from Si Se Puede Lager support Community Change, a national organization that builds power from the ground up and is a national leader in advocating for comprehensive immigration reform. Community Change believes that effective and enduring social movements must be led by those most impacted by injustice themselves. Since their founding in 1968, they have built the power of people most marginalized by injustice —especially people of color, women, immigrants, and people struggling to make ends meet— to envision and fight for a society where all communities thrive.

Become a DYV member and join your neighbors in bringing economic, racial, and social justice to our communities.

Learn about community events, new beers, and more – direct to your inbox!