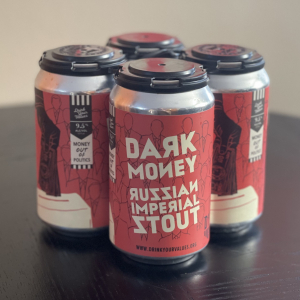 Description
A classic Russian Imperial Stout that is both bold and drinkable. Raspberries and cocoa nibs lead a charge of complex flavors with a velvety sweet finish.

Dark Money Russian Imperial Stout is available year-round in cans and on tap.

Buy a Four-Pack
Buy a Multi-Pack

In 2010, the landmark Citizens United Supreme Court decision gave corporations a green light to spend money on political ads targeting candidates and issues via shadow SuperPACs. Since that decision, over $1 billion in dark money has been spent in American elections. This “dark money” is routed through opaque political groups, traceable only to the organization spending the funds – keeping donors invisible and thus reducing the transparency and accountability of our politics.

This CANpaign supports activities to increase the transparency and accountability of American elections.

Supported Organization
Profits from Dark Money Stout support community organizations based in the Midwest who are working to increase the transparency of our local, state, and federal election systems.

Become a DYV member and join your neighbors in bringing economic, racial, and social justice to our communities.

Learn about community events, new beers, and more – direct to your inbox!